Downingtown’s origins are of a small village located midway between Philadelphia and Lancaster. The village was first known as Milltown since it was the location of the last mills on the edge of the unsettled western frontier. Thomas Moore erected ‘a water corn mill’ in 1716 and Roger Hunt established a gristmill in 1739. The deteriorated structure of the Roger Hunt mill and millrace still survives in Downingtown to this day, and was placed on the National Register of Historic Places in 1979. In 1761, John Downing opened a tavern on the east side of the Brandywine Creek, which was first known as the Downing Mill Inn; not long thereafter, his father, Thomas, developed an industrial complex of mills on the Lancaster Road in Milltown.

Around the time of the American Revolution, Milltown began being known as Downing’s Town. During the Revolution, the town was used as a location for storage of food supplies; a forage magazine was constructed in Downing’s Town to hold provisions for the troops. During the time of the Revolution, Richard Downing, son of Thomas, continued to operate and expand the family’s mill complex and the Downing family continued to prosper in the small village.

After the war of 1812, the village name of Downing’s Town was changed to Downingtown. The development of stage coach service from Philadelphia to Pittsburgh through Downingtown influenced the villages growth and prosperity. As transportation changed from stage to railroads, Downingtown embraced the changes. New jobs became available and the population grew. The Industrial Revolution also affected the growth of Downingtown, industry and manufacturing facilities located in Downingtown because of its central location and good access to rail transportation corridors. 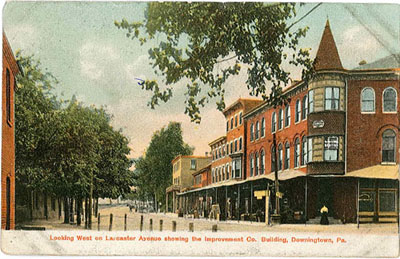 In the 1920's, many municipal improvements were undertaken such as the beginning of trash collection, erecting the Municipal Building and creating the Dr. Edward Kerr Memorial Park. A newly appointed park commission solicited funds for the planned park. The commission depended on public subscriptions plus annual contributions from the school board and the Borough Council to maintain the park.